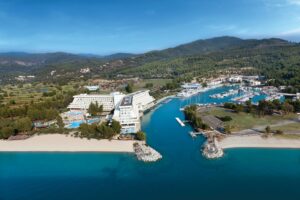 The Nautical Club of Thessaloniki (ΝΟΘ) is hosting this year the international sailing event ” 2022 North Aegean Cupp”, for boats with ORC and IRC certificates. After the event that opened and closed in 2020 with the races taking place for the first time in the Thermaic Gulf, the Κύπελλο Βορείου Αγαιγου returned to its seat in 2021. The Porto Carras Grand Resort is hosting the event again in 2022 and it gives the opportunity to be hosted and compete in our favorite waters of the Gulf of Toroneos. Leaving behind the months of lockdown and bans, we are waiting for you in the race for the Greek open sea sailing in the unique environment of Porto Carras in Chalkidiki.The start of the event and the meeting of the governors will take place in Porto Carras, which will be the venue of the event. Participating boats will be docked at Porto Carras marina. Itineraries will include controlled track routes and parallel routes in the Toroneos gulf.

The Nautical Society of Thessaloniki brought the open sea to the waters of the North Aegean. In 1978, at a time when competitive sailing but even simple adult engagement with the open sea was still at an early stage, ΝΟΘ announced the first international races for open sea boats in its own waters. Unfortunately, in the first year, the games did not take place due to the earthquakes in Thessaloniki, but they started dynamically in the next one, in Skopelos. The crème de la crème of Greek sailors, with many participations in international events, as well as big names of the open sea and the oceans, arrived in the North Aegean. “It’s the most well-organized race I’ve ever participated in,” said the Dutch sailor Bruynzeel, inventor of marine plywood and former winner of the famous Sydney-Hobart race, in Skopelos in 1979, encouraging the organizer with this saying.

In 1981 and 1982, the games were held in Porto Karras, Halkidiki, then they returned for a while to Skopelos, and in 1985, the event was permanently established in Porto Karras, where captain Yiannis Karras won the first awarded cup. At the same time, corresponding to the major international events, the matches become much more technical. Thus, the program of the competition week, in addition to the open sea courses, also includes sailing races of “closed” competition – Olympic triangles, tables and ortsa-prima. The Nautikos Omilos Thessaloniki is probably the first group in Greece, which established this kind of competition program.

After about a decade, the Nautical Club of Thessaloniki came back in 2013 with the revival of the North Aegean Cup, simultaneously organizing the Panhellenic Open Sea Championship in collaboration with the EOI Open Sea Committee. The successful event was celebrated with the participation of 36 boats from all over Greece.