Article on www.biscotto.gr by Kostas Giantsios

I received an invitation, a pleasant surprise I would say better, to visit Porto Carras, which is at the beginning of a new era and a big bet. After all, it is not a grand resort or a multi-dimensional hotel complex, but a great chapter in the history of Greek tourism, written by a visionary shipowner, Ioannis Karras, and now he is preparing to fill new pages by continuing this precious legacy.

Everybody has a story from Porto Carras

I remember in the late 80s, where we left our “base” in Gerakini and did a mini tour on the second “leg”, passing the gates of Porto Carras. In the eyes of a twelve-year-old from Serres, this was the most impressive stop of the excursion. The largest marina in Greece, as it remains, and one of the largest in Europe with boats, cafes, restaurants, and the golf course, where we watched Konstantinos Karamanlis playing his favorite sport on TV. All impressive. 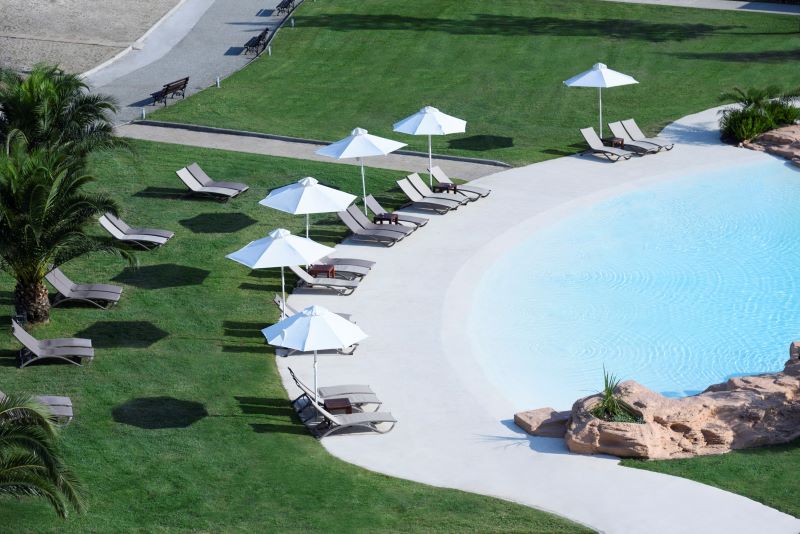 I’m sure many of you have a similar story to share. This aura of the place, which immediately turned the visit into an experience, distinguished Porto Carras from any other similar venture in Greek tourism and this is something that has been recorded and is experienced even now.

The vision of a pioneer

It has been written that a cruise to celebrate the millennium of Athos, in the summer of 1963, was the reason for Ioannis Karras to know the location, which would host one of the largest resorts in Greece and Europe.

Going out to the balcony of my room and facing the view of the sea, I notice how the building itself “connects” with the landscape, it does not impose itself on it. Meliton, one of the two major complexes, the other being Sithonia, I learn was designed by Walter Gropius himself, the founder of the Bauhaus school. In fact, it must have been one of his last designs, as he died in 1969 and did not see the creation of the building. A characteristic of Porto Carras is that leaders in their field have collaborated to bring the vision to life and change the overall approach to luxury hotels and services in Greece. 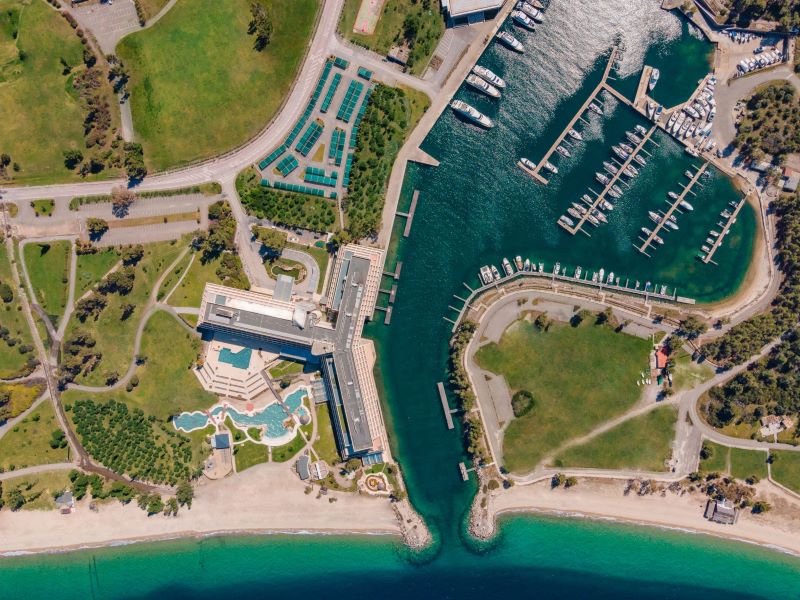 In the evening, taking a walk in the marina and passing by the conference center, I realize its impressive dimension as well as the spaces available for dining and regional shops. I sit down for a glass of wine at the Cavos bar and in front of me opens the largest marina in Northern Greece with the capacity to accommodate 315 boats. 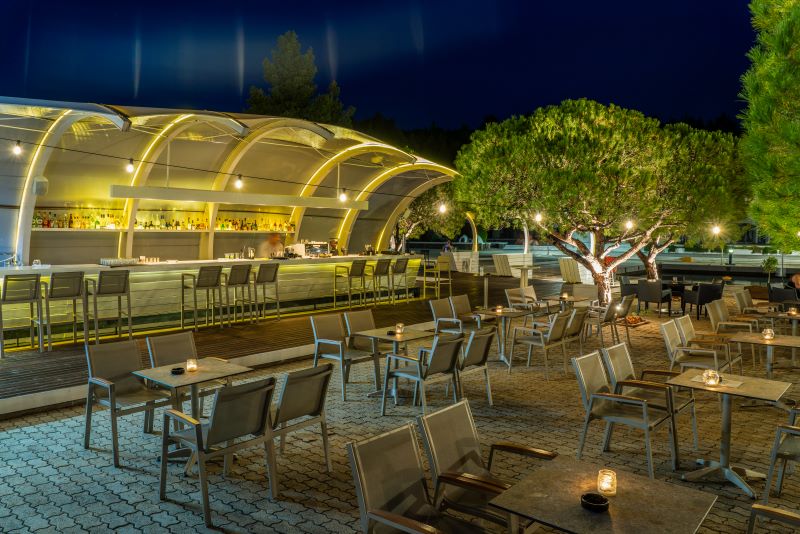 This admittedly impressive image I will enjoy from another angle, having my breakfast on the terrace of the restaurant. A buffet that has everything and where some of the dishes are prepared in front of you, gives you delightful options with salty and sweet flavors, lots of fruit and cereals and of course eggs cooked in all ways. Add to all this the view of the marina or the open sea from Meliton’s large terrace and you understand that the experience is delightful.

Visit to the largest organic vineyard in the country

Apart from the tourist sector, the presence of Porto Carras in the wine history of our country is also special. The Porto Carras Estate has already entered the “new era”. After breakfast, around noon, Mr. Christos Katsanos, the project marketing manager of Domaine Porto Carras – New Era, took it upon himself to take me on a tour of the vineyard, the winery, and the tasting area. We passed the gate and the rue Emile Peynaud, by the Professor of the University of Bordeaux, who undertook on 1970 the creation of the vineyard and the winery, we arrived at a space where the winery, the Melisanthi room, and a part of the vineyard create an oasis in ‘ a spot that, despite the midday heat, was cooled by the trees and the breeze coming down from the valley. 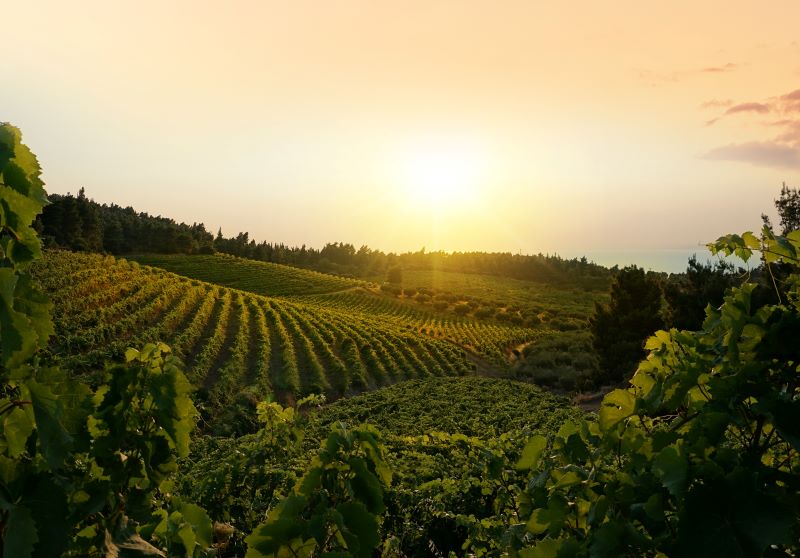 Professor Peynaud brought in varieties such as Cabernet Sauvignon, which were ideally adapted to the environment and soils, but he also looked for Greek varieties, which were revived or saved. Malagouzia, Limnio and Assyrtiko in its continental version are some of the 28 varieties grown in the largest organic vineyard in Greece and one of the largest in Europe. In a period where the wine scene in our country had nothing to do with what is happening now, the Porto Carras Estate created wines with methods that “saw” Europe by introducing pioneering elements as early as the 1970s.

At the Winery, which architecturally belongs to the Bauhaus style, I met the oenologist of the estate, Mrs. Efrosony Drossou who gave me an overview of the changes that are gradually being made for the “New Era”, as this new chapter for Domaine Porto Carras is now called.

Saying goodbye to the people I met at the estate, I return to Meliton for some rest and dinner, at the Pefko restaurant.

Greek gastronomy, as it should be, at Pefko Seaside Restaurant

My day would end with a dinner at Pefko Seaside Restaurant located on the beach of Porto Carras. There, chef Apostolos Kontoulis and his team were waiting for us with suggestions of Greek cuisine, familiar, summery and with the best raw materials. After all, the area has many products for the ingredients of a delicious summer kitchen and of course fresh fish. If I had to give the feeling of what I tried in one sentence I would say “Greek gastronomy, as it should be”.

A variety of hot and cold appetizers puts you in the game of flavors in the best way, while for a visitor from abroad it is an ideal introduction to the flavors of the Greek summer. Seafood and meat, as well as daily specials complete a menu with an emphasis on authenticity, without chatter, where the flavors of the ingredients support each other and you immediately feel the value of the quality raw material. Very important will be the addition of an orchard, where many of the products used in the kitchen will be grown, while today the majority comes from local farmers.

I consider Pefko Seaside Restaurant to be an excellent proposition for all those who find themselves in Halkidiki, since it is not only for those staying at the hotel. Also, its program does not lack culinary events, such as bbq or evenings that combine flavors and live music.

The wide range of activities for all ages

Another feature of the services that guests of Porto Carras enjoy is the varied activities for all ages. From the children’s activities with gymnastics and sports in the sea to the aerobics in the pool that young and old did in the mornings to the well-being services at one of the largest Spa centers in N.A. Europe, it is certain that everyone can fill their day creatively. After all, the facilities with the golf course, the tennis and football courts as well as the programs for walks, cycling, and horse riding cover all the needs for leisure, wellness, and sports.

I think that in about two days I understood that the glamor of this legendary complex for Greek tourism and this special aura is due to the fact that the vision of a pioneer was realized in the best way and with the best partners and, most importantly, everyone who visited experienced it the space. It was no coincidence that Porto Carras and the legendary Villa Galini were favorite destinations for Salvador Dali. He was not a simple visitor, he intervened by designing the red room and the bathroom. The same applies to the many personalities who have chosen Porto Carras since the beginning of its operation.

Maria Callas, Francois Mitterrand, Valéry Giscard D’Estaing, John Kennedy Jr and many others had appreciated the value of location and hospitality in previous decades. And now a new page or a new chapter that we all hope will bring this important asset of Greek tourism back on the upswing while maintaining the key elements of Ioannis Karras’ vision. I don’t need to add data regarding economic development, jobs and all that one understands in cases of such large projects. I will dwell on the hospitality, on the people with appetite that I met and on how they perceive the seriousness of the undertaking and their willingness to participate in a new vision.

*I want to especially thank Dimitris Petkousis, Marketing Manager and Ramina Ibragimova, Marketing Executive, Christos Katsanos, chef Apostolos Kontoulis and all the people I met and served me during my stay at Porto Carras Grand Resort.